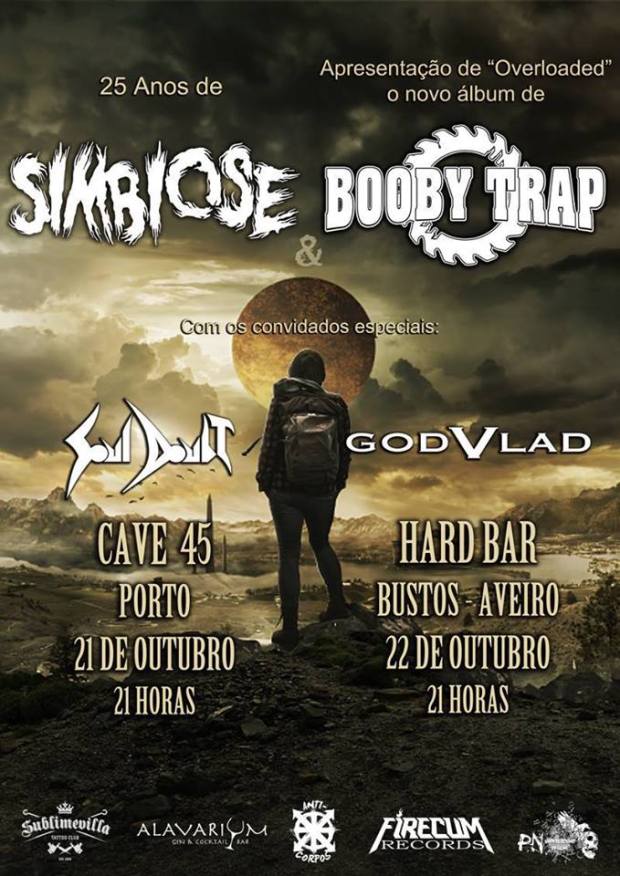 There were a lot of reasons to party and celebrate this past Friday at Cave 45. I almost didn’t make it on time because downtown keeps having less and less parking space each week, fortunately, the Facebook schedules are always off by an hour and a half so I go there in time to see “Soul Doubt”.

Always enjoying themselves to the max while acting and playing accordingly, “Soul Doubt’s” shows are always a great thrash infused way to start a night out. The crowd was vague, shy and in small numbers but this means very little to their frontman and the band in general, always owning the stage like few others do around here. As usual, their show was a great opening act.

Next up was “Booby Trap” time, the band who was unleashing their new album “Overloaded” and who also brought Satan along with them. Another band who knows how to own the stage by the bollocks, something I’ve seen them do before multiple times in different places. Sadly, the drunken audience was either too drunk or not drunk enough yet so the show was a little mild but once again, this meant very little to the band who still played like there was an arena of screaming groupies in front of them throwing wet panties, that’s the fucking spirit! They played their usual cover of Motorhead’s Ace of Spades and one from Ratos do Porão, beber até morrer.

Afterwards, “Simbiose” came to the stage to celebrate twenty five years of their beautiful crust grind career. As in the other shows, the crowd was wagging itself mildly like some sort of Ned Flanders although slightly more viciously than before. That is until the vocalist said “Guys, if you have friends outside who don’t have money for tickets, tell them to get in here with us because that’s what Simbiose is all about!”

I actually had friends outside who were aching for some grind, crust partying, I rushed out and back in time to see the next song starting. Mother of fucks, that’s when the show really started, suddenly there was a shitload of people flying around, hair swinging everywhere with “Simbiose’s” songs like “Zoo-não-Logico”, “Believe”, “Modo regressivo” and other songs as the soundtrack. You know a mosh pit is serious when there are two shirtless guys in the middle who can’t stand still. However, no one could keep still, “Simbiose” was intense, incredible and gave an amazing show worthy of their 25 years grinding and crusting up the underground music scene. 25 years and these guys are still full of fucking energy and ready to tear your asshole wide open with the power they unleash on stage.

A night that started slow but ended with a nuclear blast to the face, extremely satisfactory, I wish all these bands reach their 30’s and throw a party like that again. I don’t need to say this about Cave 45 since they are beautiful and throw awesome parties on a weekly basis.