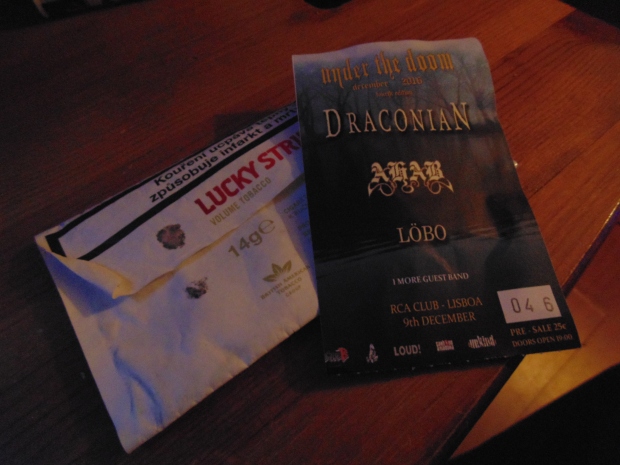 This Friday, for one night only we went Under the Doom. No funds to attend the entire festival and see “Samael”, no credentials granted but we still wanted to be Under the Doom, even for one dark, cold night.

As we entered the venue we caught “Woebegone Obscured” playing their last song, a nice blend of doom, black and death that made us wish we had caught more. Sadly this was also when we remembered that RCA has certain rules that make it a not so amazing place for live doom music, you can’t smoke inside, we had three pure reefers ready to ignite but we couldn’t, tears were shed, we felt the doom in the wrong ways.

But this wasn’t going to stop our enjoyment of the festival, we had whiskey, we had smokeables and we had awesome live music to enjoy. After getting high outside, we came back in time to see “Löbo”, a band so dark, doomy and underground that they have exactly one demo, one EP and one single, all of which combined possess enough music for them to play all night. Dark, ambient riffs echoed in the room as well as on the streets, we could feel the glass and walls trembling before we went back inside to experience the music right in the face, truly exquisite.

Back outside to smoke some more and return before one of my personal favourite bands, (that’s right, this part is going to be extremely biased because I fucking love these guys) “Ahab”! Starting with some ambient samples that made it sound like we were below the deck, feeling the waves rock the ship back and forth, then “The Divinity of Oceans” started the show, I felt every second of that massive masterpiece, from the part where the giant sea monsters crush the ship, the rabid thrashing on the surface struggling to survive, to the slow, tranquil yet agonizing silent descent into the depths of the ocean.

I wasn’t even slightly ticked that the set list was nearly the same, “Deliverance (Shouting at the Dead)” and “Old Thunder” followed just as they had last year on SWR when I saw them for the first time. Seriously, play whatever you want, I love it, love everything about it. The only difference this time was in the last song, instead of “The Hunt” they played “To Mourn Job” from the album that wasn’t out the last time I saw them, coincidently it was the song I wanted them to play the most from that album, my desires were more than fulfilled. Sadly, my long time wish to see “Ahab” play more than four songs per show did not come true, still, a tremendous presence and show from a band that I have seen before, came 300 miles to see again and would see again another time.

After the oceans calmed down, came “Draconian” a band from my teen years that I’ve missed live too many times, but finally here they were. I have been a little disconnected with their work since “Turning Seasons Within” but I recognized some songs from the old days.

We did miss the first part of the show to get high, still I managed to catch “Daylight Misery” and “Seasons Apart”, if they did “The Apostasy Canticle” or “Silent Winter” while I was getting stoned outside, I missed out bad, shame on me. Their attitude and energy on stage was tremendous, definitely a band I should have seen years ago. They probably didn’t play “Riders of the Black Earth” right? Right?

Anyway, although my shameful teen platonic fantasies were filled with the voice of Lisa Johansson, the new vocalist did a good job as well and my fanboy cravings were satisfied with her performance, Anders Jacobsson was also fucking good. It was a great show all around, the new songs sound promising as well.

The Night Under the Doom ended with a thunderous applause and not an extra “Draconian” song because one of the guitars got fucked.

Still a massive experience, let’s hope Notredame Productions can up the scale for next year and keep up the good work. And maybe do it some place where smoking is allowed.