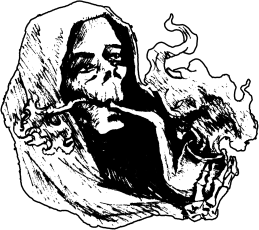 It’s always good to know how many people have absolutely nothing to do on a Thursday morning. Without that in mind, we went to Cave 45 to witness some sexy, balloon popping, evil Knievel clad delta blues.

Starting the party came the four horsemen of spaghetti westerns and surf rockabilly blues known as “The Good, The bad and Azevedo” (O Bom, o Mau e o Azevedo). Some chill groovy tunes came our way through their instruments in delicious songs such as “Cabronita”, “Snowball”, “Surfin’n with a Hammer”, “Devil’s Island” and others.

We had previously seen these fellas opening for “Messer Chups” last year and it was fucking amazing, this time they played a new song which was way faster than their usual stuff, fine by me, we love the fast shit as much as Americans love getting fat and gross.

The crowd loved their shit as did we once more and we hope to love them live again in the future.

Then came the man of the show. Sadly for us, we went to get beer outside because 50 cents less for a beer is a huge deal for broke ass drunken retards such as ourselves, therefore, when we arrived inside, SHIT WAS FUCKING CROWDED!

First off, congrats on that “Bob Log III”, man of the hour, star of the night, I have never seen Cave 45 so full of people, ever, and we go there a lot. Now on to the show.

On the first half, we got stuck on the far side of the bar (because once again, we are drunks) and we could only see the top half of Bob’s helmet (unlike our photographer who got there sober and early), the music was lit and we would have danced our asses off if there was any room to do it.

He asked one of the girls from the audience (as he usually does live) to sit on his knee while he played a song. Because we were really far back and could only see the top of their heads, it seriously looked like she was riding something other than his knee, but I don’t think Cave 45 has gotten to that low level of scum sucking debauchery yet, not saying it should, not saying it shouldn’t either, I’m sure I’ll love it either way.

Then we got a good glimpse of the man himself when we took a ride on an inflatable boat through the crowd. He didn’t stop playing while this was happening, that is some fucking showmanship. Did we forget to mention he popped a bunch of balloons while playing? Yeah, he did that, didn’t even need to fill them up himself, that’s what audiences who love you are for. 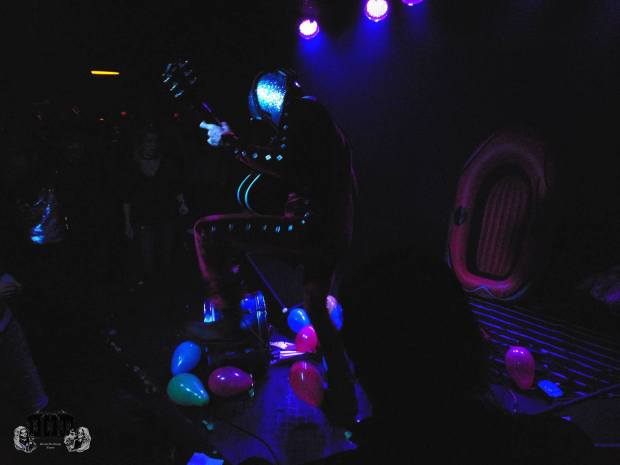 Eventually I got sick of looking at the back of people’s heads and the tip of Bob’s helmet, so I painstakingly pierced my way through the crowd as far as I could towards the front. There I could see the man in all his astronaut helmeted glory, we moved like there was lightening in his veins instead of blood and he planted the party all by himself, much like Eric Cartman’s dad did a few weeks ago on this very spot.

The lights on the ceiling reflected on his helmet and it seemed like a dark creature from the void was staring at us while he laid down the delta blues, I could also see the crowd reflected on the helmet as well as his hand while playing, it was like watching a live video on his face of the show while being at the show, the drugs must have been kicking in.

Anyway, Bob Log III’s shit was most definitely perfect, sadly for us, getting to the front row was only somewhat satisfactory because it was seriously crowded in there. We could barely get the joints and beer to the mouth as our personal space was raped from every direction, we do feel empathy though and are aware that we were probably in turn, raping someone else’s personal space.

Photo Editing by Angela Petrenko, Diogo A. and Joana Carolina (We need to get our shit together with our photographers)